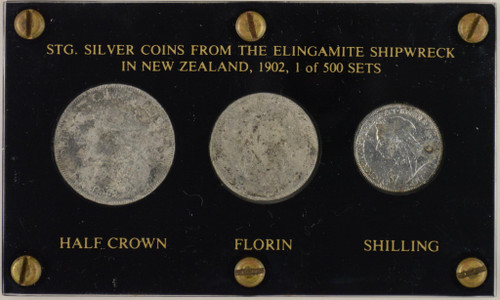 On November 9, 1902 the SS Elingamite piled headlong into West Island claiming 45 lives. By early 1907 some 4,000 pounds of bullion had been raised but after two divers Harper and Clarke died of the bends from working at the considerable depth the remaining treasure was abandoned as hopeless.

The Elingamite syndicate comprising Kelly Tarlton, John Gallagher, John Pettit and Wade Doak was formed in 1966 and 10,000 coins were salvaged. Due to electrolytic action during their 66 years of submersion inside the decomposing wreckage at 150 feet, the coins in many cases were hardly recognisable and many were brought to the surface in large black lumps. Subsequent careful treatment has resulted in these sets being made available.

Three coins, halfcrown, florin and shilling, the first two being of the Victorian veiled head and the shilling being of the young head. I
In perspex case and white case, as issued by Auckland Coin and Bullion Exchange.